Professional interpretation requires a human interpreter, this is true now and it will be for the foreseeable future. It will take a long time for the technology to catch up and provide the level of quality and accuracy that an interpreter can provide. Professional interpretation will remain the standard for courthouses, churches, international conferences, and any other setting where it is vital that communication flows as smoothly as it would if everyone spoke the same language. For these contexts, professional language interpretation systems such as the Enersound TSB-10 are required. These systems consist of a transmitter connected to a microphone for the interpreter and FM receivers with headphones for the listeners. Interpretation happens in real time with a live interpreter present facilitating communication in between languages.

When to use an interpreter and when an automatic translator will do the job?

In addition to the scenarios described above that require a live interpreter as well as language interpretation kits with transmitters and receivers, there are other instances in which an automated translation device will do the job just fine; interpreting between 2 or more languages and even handling translation of written text or images. One example would be when a tourist needs to get around in a foreign country and they are not familiar with even the most basic phrases of their local language. A lightweight, portable, battery-operated device that you can carry in your pocket can make all the difference: it will allow you to ask for directions, order a cup of coffee, tell a taxi driver where you need to go, as well as many other common short interactions where a basic translation of a simple sentence in the foreign language will be enough. And it is not only useful when you need to tell something to a local, but it can also be used when they speak back to you: you can hold up the device to listen to their words and then have them replayed in your own language. This is thanks to the speech recognition feature this device has.

Our Enersound AIT-110 features a rechargeable battery that can provide up to 8 hours of voice translation and 180 hours of standby time. It can support up to 8 different languages for offline translation (including Spanish, Korean, German, French, Russian, Chinese Mandarin, Japanese and English) and 227 languages while it is online. If the user cannot connect to the internet, these 8 offline languages can be used for emergency assistance provided the user has downloaded the languages first. It comes in three colors: black, white, and blue. 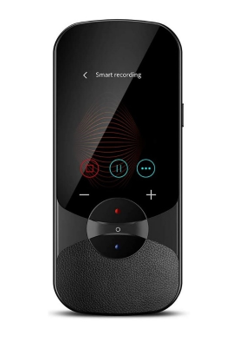 Besides the two-way translation capability described above, there are also some other more advanced features, such as the ability to prerecord messages in other languages using its double mic with noise reduction to have them ready to be played back when the time comes such as during important interviews, meetings and conversations. It has a built-in camera that supports 45 languages for photo translation; you only need to aim it at a street sign, or a restaurant’s menu and it will provide a translation of written text in real time.

These are some of the features of the new Enersound AIT-110 portable pocket translator. It is simple to use and its availability in so many languages, make this handheld translation device the ideal choice for international travelers who can communicate with locals across cultures and languages with the press of a button.

Please do not hesitate to contact us if you have any questions about the AIT-110 at 1-888-737-4030 or by email to sales@translationequipment.net.